The Jaguar Independent Rear Suspension was designed in the early 60's and was used without re-design right up to 1987 when the Ser 3 XJ 6 ceased production. Even then, the basic concept of using the halfshafts for the upper control arm was retained. The cage, and the trailing arms however, were eliminated, thank goodness.

The Jaguar IRS is really a fine design, but has a flaw called "dreaded roll oversteer", caused by the action of the two trailing arms when the rear suspension compresses. As you are aware, the cage is mounted to the "frame" using molded rubber mounts, to allow the whole unit to move. It really moves about + or - 3/4 " if you snap out the clutch ! If you really watch this happen, you'll flip out! In a hard turn, the wheel on the side of the car whose suspension's being compressed, is forced rearward by the effective lengthening of that side's trailing arm, while the reverse is happening on the opposite side, pulling that wheel forward ! This, in effect, is rear wheel steering, without asking for it.

I was aware that most of the guys who race E types have somehow tied the bottom of the rear cage to floor, so that the cage won't move, and have eliminated the trailing arms. I didn't want to lose my center exhaust pipes and the E type look, by installing the mechanisms of which I was aware, so I went with the stock setup. You wanna talk scared ? Try hitting the bottom of the hill at Lime Rock at about 85. Right at the bottom in the right hand turn, where the left side suspension compresses and the right side extends, the "rear wheel steering" kicks out the rear of the car, scaring the hell outa you ! Needless to say, it slows you and your lap times down.

When attending the JCNA's Fall Board meeting in Phoenix, I visited Bill Richert's resto and race prep facility, where he was working on fellow Director Dennis Eynon's E type racecar. I looked underneath and saw the solution to the problem; a 3/8 thick, "T" shaped plate, bolted to the bottom of the cage in the standard locations, and bolted to the underside of the floor under the 2 frame rails, and to the bottom of the tapered cones which comprise the mounts for the large end of the trailing arms.

So much for killing the cage motion. The wheel thrust was being taken up by specially made arms, bolted to the lower control arms in the standard location, and tied into this plate by a Heim joint, ALONG THE SAME CENTERLINE AS THE PIVOT SHAFT FOR THE LOWER CONTROL ARM !!!Attached at these two spots, they allow the control arms full up & down motion, without binding. An added benefit was that this mechanism allowed center exhausts!

It took a couple of months for mine to arrive, as these are made in small quantities, when he accumulates a few orders. It took about 4 hours to install, because it's strictly a "bolt in", and requires only that you make and install two nut plates inside the two frame rails .It took another two days for me to drop the cage and renew U-joints, rear rotors, pads, and cage mounts, and to re-install.

I had signed up for 2 days of HPDE at Watkins Glen, the best track in the Northeast, and couldn't wait to see if there were a difference. I'm the guy who couldn't tell the difference if you let 10 psi outa my front tires !

Wow ! It was as if I were driving someone else's car, the E type tracked thru the "bus stop" as if it were on rails. At Lime Rock, the compression at the bottom of the hill has no effect on the steering. My LRP lap times dropped by 1.5 seconds which may sound like a small improvement, but it's not. Plus, I'm no longer scared !

This ranks as one of the best mods I've made on my car. The others are: custom vented brakes all around, 5 Speed tranny from Terry's, and the 265 - 35 X 18 inch tires and wheels. and the engine is not bad either but that's another story ! 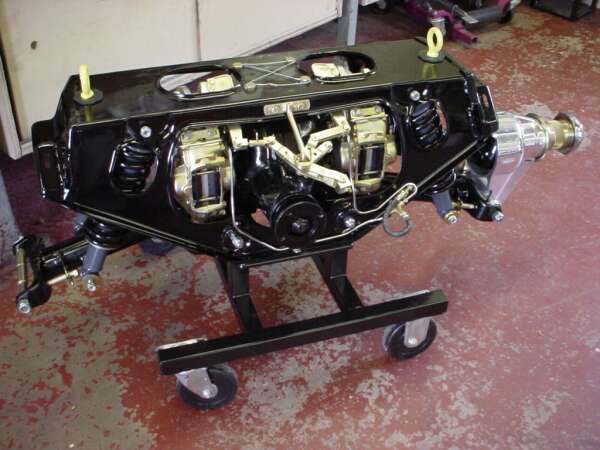 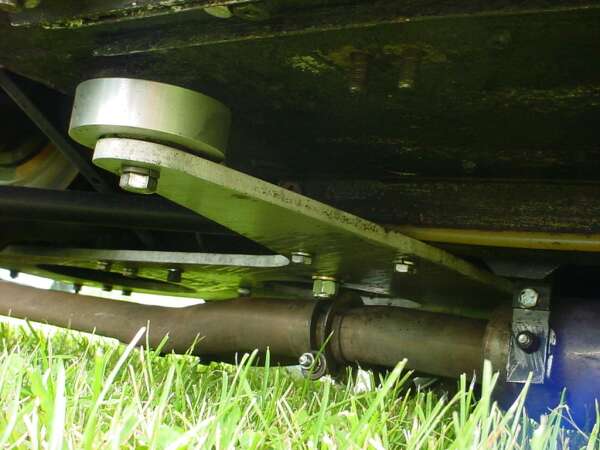 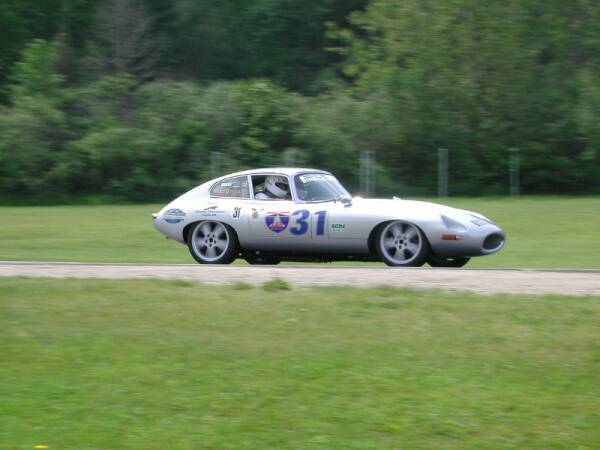