The Carolina Jaguar Club has the reputation of being the premiere fun-loving crowd of the South. Come visit or join us and see what we're all about! Find out what is happening in the world of Jaguars and other fun-related things. Our event calendar is on the Facebook page, in the Litter Box, our monthly newsletter and on our website http://carolinajaguarclub.com/events You are always welcome to come visit at one of our events before you join.

Gerald L. (Jerry) Ellison, M.D., departed his remarkable life on earth on Friday, January 7, 2022. He was born on April 9, 1938, in Beckley, West Virginia, to Avril M. and Merial Beaver Ellison. He was educated in public schools in Beckley and attended Concord College. He graduated from American University and George Washington University School of Medicine in Washington, D.C. Upon completion of an internship at Lancaster General Hospital in Lancaster, PA, he joined the U.S. Public Health Service/Communicable Disease Center and served three years at a communicable disease clinic in Honolulu, Hawaii.
Upon the completion of a three year residency in Diagnostic Radiology at the Mayo Clinic in Rochester, Minnesota he joined the Radiology staff at Cape Fear Valley Medical Center in Fayetteville, NC and practiced there until his retirement in 2003.
From childhood, Jerry, loved anything with wheels. In 2001 he realized a lifelong dream of owning a Jaguar XK140 open 2-seater which he believed to be the most beautiful car ever made. This opened a whole new world for him in the states of North and South Carolina and the Jaguar Clubs of North America. For many years he planned annual road trips for the Carolina Jaguar Club which received rave reviews and grew to include Jaguar Club members from three states. In August of 2021, Jerry received a Lifetime Service Award from the Jaguar Clubs of North America.
Jerry was preceded in death by his parents and his sister, Kyra Ellison Hicks and a niece, Jennifer Mann. He is survived by his wife of 62 years, Naoma W. Ellison and his dear cats, Grayson, Jet and his devoted Companion Cat, McCloud. He was a special "Uncle Jerry" to his surviving eleven nieces and nephews: Kent Hicks, Kendra Hicks Pacifico, Kelly Hicks, Eric Workman, Dawn Craft, Craig Workman, Mark Workman, Lori Fuselier, Mary Kulick, Erica Eder, and Karen Kulick; brothers-in-law William K. Hicks, Gene Workman (Lynda) Bill Workman (Diane) and sister-in-law Julia A. Kulick.
Jerry and Naoma were especially grateful for the wonderful care by William White who could drive his XK140 and made it possible for Jerry to attend some special Jaguar events in the past year.
Jerry was an avid art collector and served on various non-profit boards in Fayetteville. He was especially supportive of the arts organizations. He would indeed be honored by any memorial gift in his honor, and especially to the Cumberland Community Foundation for the Gilbert Theater Endowment Fund or the Cape Fear Botanical Garden Endowment Fund. Address: Cumberland Community Foundation, P.O. Box 2345, Fayetteville, NC, 28302, or online at www.cumberlandcf.org.
A Celebration of Life service will be held at a later date. 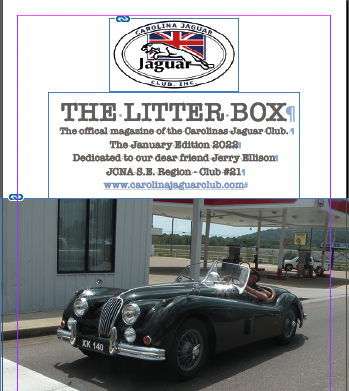 CJC's monthly newsletter is posted online and in PDF. Left click on the pdf posted at the bottom right of the thumbnail to start your copy of Abode Acrobat Reader for access. Then click on your "Print" icon to publish your copy - In Technicolor.