A WARNING FOR JAGUAR V8 OWNERS

If you own a Jaguar XK8 or XJ8 sedan you need to read on, otherwise you may return to reruns of the SuperBowl half-time show. While the facts are not fully known to those outside Jaguar's engineering staff it appears that you are at risk of a failure of the camshaft secondary timing chain tensioner which, in the worst case, can lead to catastrophic engine failure and a replacement bill of $10,000. To date Jaguar does not recognize this problem under an extended warranty policy as manufacturers often do when a design problem jeopardizes their reputations.

The problem became known to your writer when a member of the Carolina Jaguar Club had the major failure described, with no previous warning. I have since met two other victims via e-mail. But it was confirmed in the January issue of Jaguar World Monthly magazine which describes the failure "of those brittle timing chain tensioners" as common and proceeds to lead the reader through the relatively demanding repair. It appears the plastic housing of the tensioners become brittle with age so the failure is just starting to show up on the early V8's built. Accumulated mileages of 50,000 to 70,000 have been mentioned. It is not clear if or when Jaguar might have changed the plastic material whose aging is at the heart of the problem.

The tensioner pushes on the bicycle-type chain between intake and exhaust camshaft sprockets to keep the slack side of the chain from whipping. With the wear and stretching of higher mileage there is more slack. When the tensioner fails the chain slack may allow the chain to jump one tooth on a sprocket and then the exhaust valves open and close later than normal. Performance will suffer. But if the chain jumps two teeth or more the rising piston at the end of the exhaust stroke hits the exhaust valve which is still open, and that instantly is the end of your engine. Tooth jumping happens especially as the engine kicks into life when you start it.
Jaguar has redesigned the secondary tensioner 3 times since V8 introduction. Technical Bulletin 303-30 dated 12-98 recognizes a rattling noise caused by tensioners at cold start and notes a revised design with noise dampener clip added. This change commenced with engine No. 98102106XX and will be installed on earlier engines under warranty. If your engine qualifies - and you do have that noise, right? - you might try the warranty road. Engine numbers are on the upper front of the engine and apparently require removal of the center plastic cover to be seen.

Paul Skilleter of Jaguar World Monthly replied, "It appears that failures of the sort described occur only at relatively high mileages (probably beyond the 70,000 mentioned), and then only after the engine has been noisy for some while. In other words, audible warning signs are given. Nor does the failure seem common - just that it has happened, and so gets talked about. --I do not think, from everything I have learned so far, that these failures are going to be a real concern to V8 Jaguar owners.

Jaguar Cars offers no phone numbers on their website, but an email response to my request said go ask your dealer, whom I assure you has been told nothing.

What should you do? If you hear any unusual engine noises, especially at engine start, shut off immediately and call the tow truck; do not try to drive home. If your car is still under warranty and precedes the engine number above have the tensioners replaced under warranty as described in the Bulletin. Consider buying an extended warranty; if you bought your Jaguar used from a dealer you might already have one. Lacking the above I suggest your have the tensioners replaced on your own. Besides the secondary tensioners you should replace primary tensioners, all four chains, and sprockets if wear is evident because all are normal wear items that are hard to access. Keep detailed records of problems and expenses and make fusses at the top levels of the Jaguar service organization. 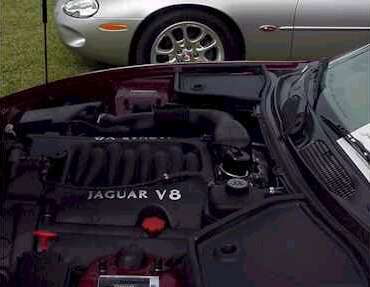